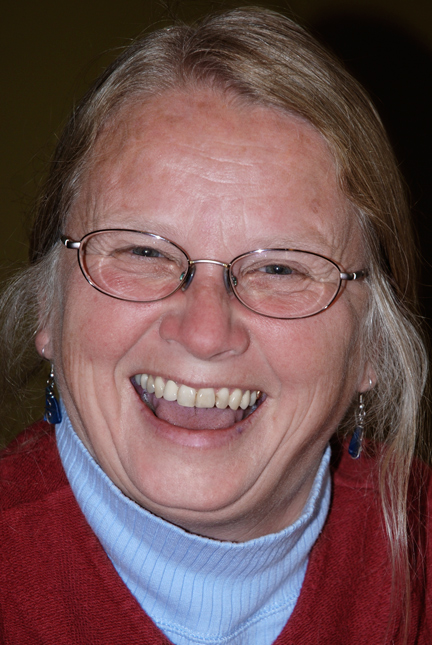 has been Town Clerk of Tinmouth, Vermont since 1985.
As of the 2000 census the town population was 567.
Tinmouth had an 80% voter turnout in the 2008 presidential election.

Do you still have town meetings?

Well, now we have informational meetings and people vote the next day. So there are lot of people that work very hard to make Tinmouth a very special place, and they really want a town meeting. We wanted to keep it and it was a very close vote. And we voted on it three times actually. First time, it was a special town meeting, we talked about it, and then voted from the floor. And it passed by like two votes to go to Australian ballots. So the people who wanted town meeting petitioned to vote on it again. So in town meeting we voted on it again, and it passed to go to Australian ballot for everything. I mean most towns in the state you can have it a lot of ways. You can do everything from the floor you can do everything by Australian ballot. But a vast majority of towns do a mix. They have a town meeting where they decide public questions, the next day they vote on officers, and then vote on budgets. It’s quite a mix and you can do it any way.

So that we were maybe one of 50 that still did everything from the floor. And probably 30 or 40 that do everything by Australian ballot. And everybody else is a mix.

If you have an eloquent school-board chair that can get up and explain why the budget went up 20%, and there’s logical reasons for it the people that were grumbling before, and were going to vote down the school budget, the budget passes because they actually had a chance to listen to what’s actually going on. A concern a lot of us have is that people are voting, when they vote by Australian ballot, that they are uninformed.

But when you had those 210 people there at town meeting, some of those people had never been to a town meeting before but they were there to vote out town meetings they hadn’t ever experienced.

You were in the legislature, did you see democracy in action?

Vermont has a citizen’s legislature, which is really good, as there are people from all walks of life. A lot of talented people and they have expertise in different areas. It’s fun to be part of it, to be there when something happens that will affect Vermonters in a positive way. And to be able to say, “No, this sounds good on paper, but I wouldn’t want to have to administer that and I’m telling you it won’t work at the local level. It’s just not a good idea.”

First year I served in Montpelier, I said if I ran my town like this, they’d tar and feather me and run me out of town. There is a saying about making legislation, that it is a lot like making sausage, you wouldn’t eat it if you watched how it was made.

The General Assembly has its own set of rules, and if you don’t know them there can be unexpected consequences – like the time the Speaker of the House tacked a 165 page bill from the Senate onto a bill the House was discussing on the floor. It would normally have been assigned to a House Committee for review, but we had to deal with it right then and there. The process, I think, could be better. But it’s been working, for a couple of hundred years.

What are the threats to democracy that people usually don’t list?

I think, a really big threat to democracy is lobbyists. My first couple of years up there (legislature), I talked to a legislator that had been there 20 years, we were sitting in the cafeteria one day, and I looked around and said, “There are hardly any legislators here but the cafeteria is full. A lot of times tourists or constituents come to visit but not this day. He said, “When I came here 20 years ago there were probably five lobbyists.” That particular year healthcare was a big issue and there were 180 registered lobbyists just to address healthcare. There are only 30 Senators and 150 Representatives! I think Lobbyists are a big threat to democracy because they are so influential and powerful and they are there every day. John Q. Public doesn’t have that advantage, and is often not heard.

Is there equal pay for men and women town clerks?

The men generally get paid more than the women. I think that’s still true. I mean, when I first became town clerk that was true. Well, a few years ago, maybe in the early 90’s, I was talking to the select board about my salary, and one of them, who really wanted to protect my job said, “Well, we don’t want to pay you too much, because somebody else will want the job.” I’m thinking, oh, I know you are trying to help me keep my job, but pay me what I am worth and let me defend my job. I mean he meant well, but it just came out,,,